by ClippedReports
in Companies, Featured, Opinion
0

New York (CNN Business)Wells Fargo CEO Charlie Scharf has apologized after he blamed the lack of diversity at the bank on “a very limited pool of Black talent to recruit from.”

In a memo to employees released by the bank, Scharf apologized for what he was was “an insensitive comment reflecting my own unconscious bias.”
“There are many talented diverse individuals working at Wells Fargo (WFC)and throughout the financial services industry and I never meant to imply otherwise,” he wrote. “It’s clear to me that, across the industry, we have not done enough to improve diversity, especially at senior leadership levels. And there is no question Wells Fargo has to make meaningful progress to increase diverse representation.”
Scharf’s original comments, which were first reported by Reuters, were made in a June memo following widespread protests about the death of George Floyd and calls for greater diversity in corporate offices to address systemic racism.
In that that memo he said, “We need more diverse representation on our operating committee,” referring to the bank’s top executives. But he then went on to say “While it might sound like an excuse, the unfortunate reality is that there is a very limited pool of Black talent to recruit from.”
“Our progress will not be a straight line given the experience required in some of our roles, but I would ask that you judge our progress two years into my tenure as CEO,” he said later in the original memo.
CNN Business got a copy of that original memo, confirming the Reuters report.
“As I said in June, I have committed that this time must be different,” he said about the need to have a more diverse management ranks at the bank. He said he’s “encouraged by our early progress” to address that need. 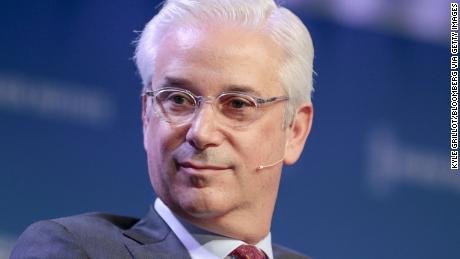 Wells Fargo names financial veteran Charles Scharf as its new CEO
Scharf was brought in as CEO in a year ago to clean up a bevy of problems at Wells Fargo, most notably the company’s fake-accounts scandal that became public four years ago. In February the bank reached a $3 billion settlement with regulators to close the books on the bank’s civil and criminal liability.
Scharf was criticized by Rep. Alexandria Ocasio-Cortez, who tweeted late Tuesday, “Perhaps it’s the CEO of Wells Fargo who lacks the talent to recruit Black workers.”
Previous Post

Trump says he will nominate a replacement for Ginsburg by Saturday

Women are the unsung heroes of this crisis

Exclusive: ‘We would not accept US drone strikes inside Kenya, ‘warns President Kenyatta