by ClippedReports
in News, Opinion, Politics
0

Notice: Trying to get property 'child' of non-object in /home/mirsbkze/public_html/clippedreports.com/wp-content/themes/jnews/class/ContentTag.php on line 27 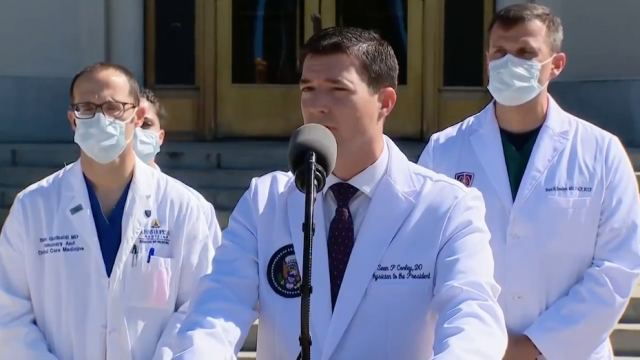 President Trump released a videotaped statement Saturday from his hospital suite at Walter Reed National Military Medical Center, assuring the nation that he was feeling better since being admitted the day before and that he believed he would return to campaign trail “soon.”

“I came here, wasn’t feeling so well. I feel much better now. We’re working hard to get me all the way back. I have to be back because we still have to… make America great again,” Trump said in the video. “We’ve done an awfully good job of that, but we still have steps to go. We have to finish that job.”

With polls showing him trailing former Vice President Joe Biden in the presidential race and just 30 days remaining until Election Day, the president said he anticipated a quick return to the campaign trail.

Questions arose Saturday over when Trump first learned he had tested positive for COVID-19, the disease caused by the coronavirus. At a press conference earlier in the day, Trump’s physician, Dr. Sean Conley, told reporters the president was “72 hours into the diagnosis,” which implied he had tested positive on Wednesday. Trump attended a large Wednesday campaign rally in Duluth, Minn., and then flew to a Thursday afternoon fundraiser at his golf club in Bedminster, N.J. Conley later said he had “misspoken,” and that Trump had first tested positive on Thursday evening.

Despite feeling under the weather, Trump interacted with roughly 100 donors at his club, and, according to the White House, was tested for COVID-19 after leaving the event. When that rapid test came back positive, he was given a test to detect antigens for the disease. It confirmed his initial positive result.

On Friday, Trump’s condition declined and he was given oxygen while at the White House, multiple outlets have reported. The decision was made by his doctors to move the president to Walter Reed late that afternoon. Since being admitted, the president has been given two different experimental drug treatments, a five-day course of Remdesivir and an antibody treatment made by Regeneron Pharmaceuticals Inc., both of which have shown signs in trials of slowing the progress of the disease.

“So many things have happened. If you look at the therapeutics, which I’m taking right now, some of them, and others are coming out soon that are looking like, frankly, they’re miracles. If you want to know the truth: They’re miracles,” Trump said in the video. “People criticize me when I say that, but we have things happening that look like they’re miracles coming down from God. So I just want to tell you that I’m starting to feel good. You don’t know, over the period of a few days, I guess that’s the real test.”

Trump’s doctors noted earlier in the day that while the president’s condition had improved since Friday, he may still face a possible downturn. Typically, COVID-19 patients experience the worst of their symptoms between the fifth and seventh days after the illness begins to manifest itself.

The president offered a conflicting account of the decision to be admitted to Walter Reed.

But Trump also depicted his admission to the hospital as a sign of strength.

“I had to be out front. And this is America. This is the United States. This is the greatest country in the world. And this is the most powerful country int he world,” Trump said. “I can’t be locked up in a room upstairs and totally safe and just say, ‘Hey, whatever happens, happens.’ I can’t do that. We have to confront problems.”

As for first lady Melania Trump, who also tested positive for COVID-19, Trump said that her relative youth was helping her cope with the disease.

Trump coronavirus : Timeline of US president's movements with wife Melania before testing positive for COVID -19

Life on the Edge: At home in Mount Agung’s Danger Zone

Women in Politics: Urgency of Quota System For Women In Regional Elections